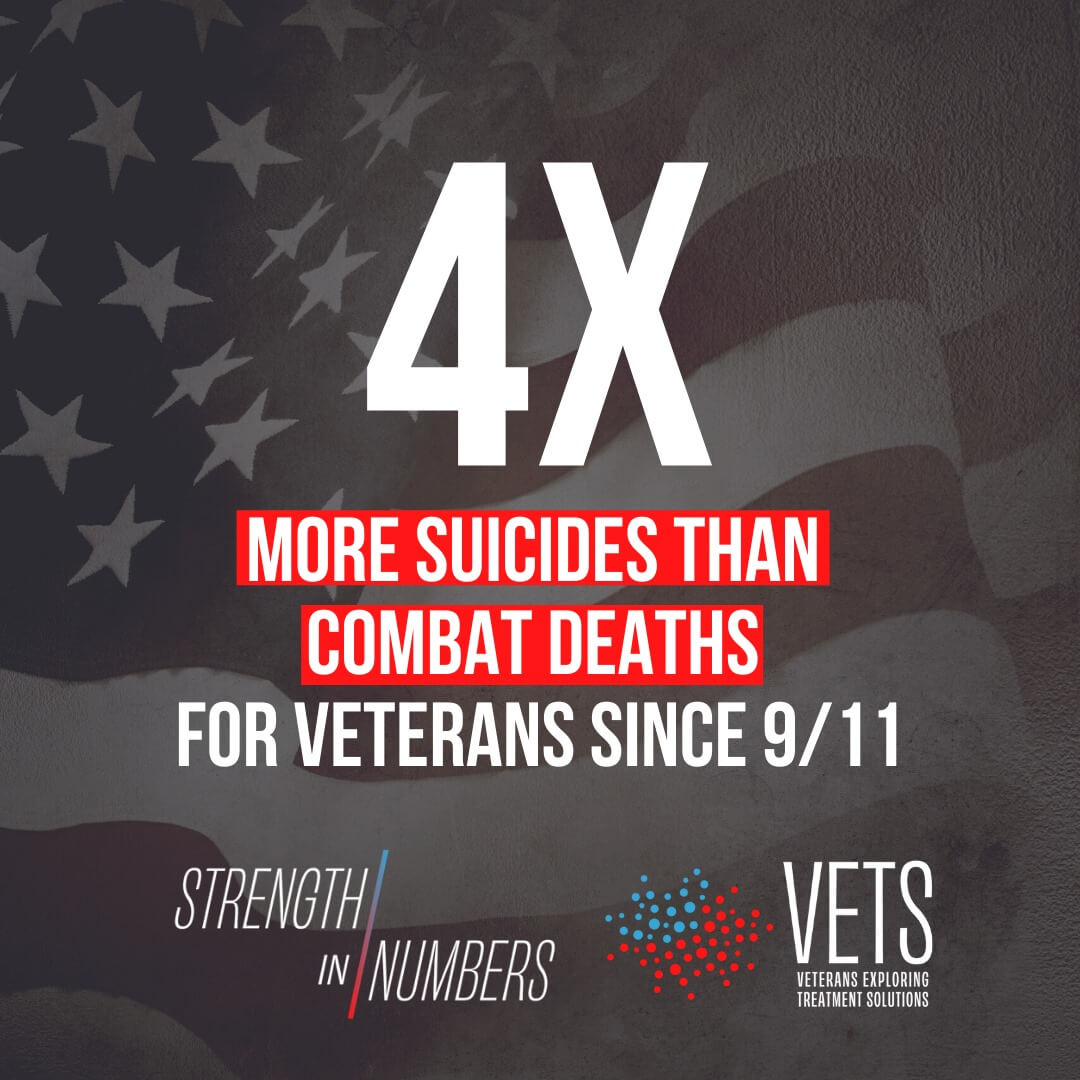 As we pass the 20th anniversary of 9/11, and an unprecedented 20 years of sustained combat, America’s veteran suicides continue to skyrocket: as many as 20 suicides every day according to recent statistics, with rates continuing to rise. This is an excruciating reminder that our veterans urgently need access to more meaningful healing options.

In honor of National Suicide Prevention Month, and to commemorate the 20th anniversary of 9/11, Veterans Exploring Treatment Solutions (VETS) has launched the Strength in Numbers initiative. From September 11 through November 11—Veterans Day—VETS is asking for help sharing its video, signing up for its email newsletter, and making tax-deductible donations to help save the lives of our nation’s veterans through psychedelic therapy.

The United States’ sudden withdrawal from Afghanistan has worsened the mental health crisis among veterans. For those who served, struggled, and lost their brothers and sisters during our country’s time in Operation Enduring Freedom, the departure is difficult to understand and accept, especially for Special Operators who were relentlessly utilized in the nearly 20-year conflict.

“The terrible reality is that the veteran suicide epidemic in the United States could worsen in the months and years ahead. Many OEF veterans are feeling frustrated and hopeless after the withdrawal from Afghanistan, and the therapies available to them in the U.S. are marginally effective,” said VETS co-founder and 13-year Navy SEAL veteran Marcus Capone. “Psychedelic therapy has transformed the lives of hundreds of VETS’ grant recipients, and now VETS needs help expanding our capacity to provide these brave men and women with the resources they need to access meaningful healing.”

“I am currently facing a lot of anger and sadness from Afghanistan after our recent withdrawal,” said one VETS Foundational Healing Grant recipient. “It’s causing major issues with my work and family. Leaving Afghanistan this way is breaking what was left of my heart.”

To date, VETS has assisted over 400 Special Operations veterans in receiving a critical lifeline to healing through psychedelic therapy—and many more are awaiting this important opportunity.

Psychedelic therapy is poised to be the next major breakthrough in mental healthcare, and researchers also believe it could hold special promise for the treatment of post-traumatic stress disorder (PTSD) and mTBI (mild traumatic brain injury), conditions commonly affecting veterans. VETS is leading the way in providing critical support to former Special Operators, while also adding to the growing body of research proving the extreme efficacy of these therapies.

Armed with the combination of powerful stories from credible voices, as well as compelling, science-backed data, VETS is transforming the lives of veterans while helping to heal the entire family unit.

On September 11, 2021, VETS released “20 Years Since 9/11, Veterans Need Access to Psychedelic Therapies,” a video short that highlights the pressing need for psychedelic therapies for Special Operations veterans after 20 years of war.